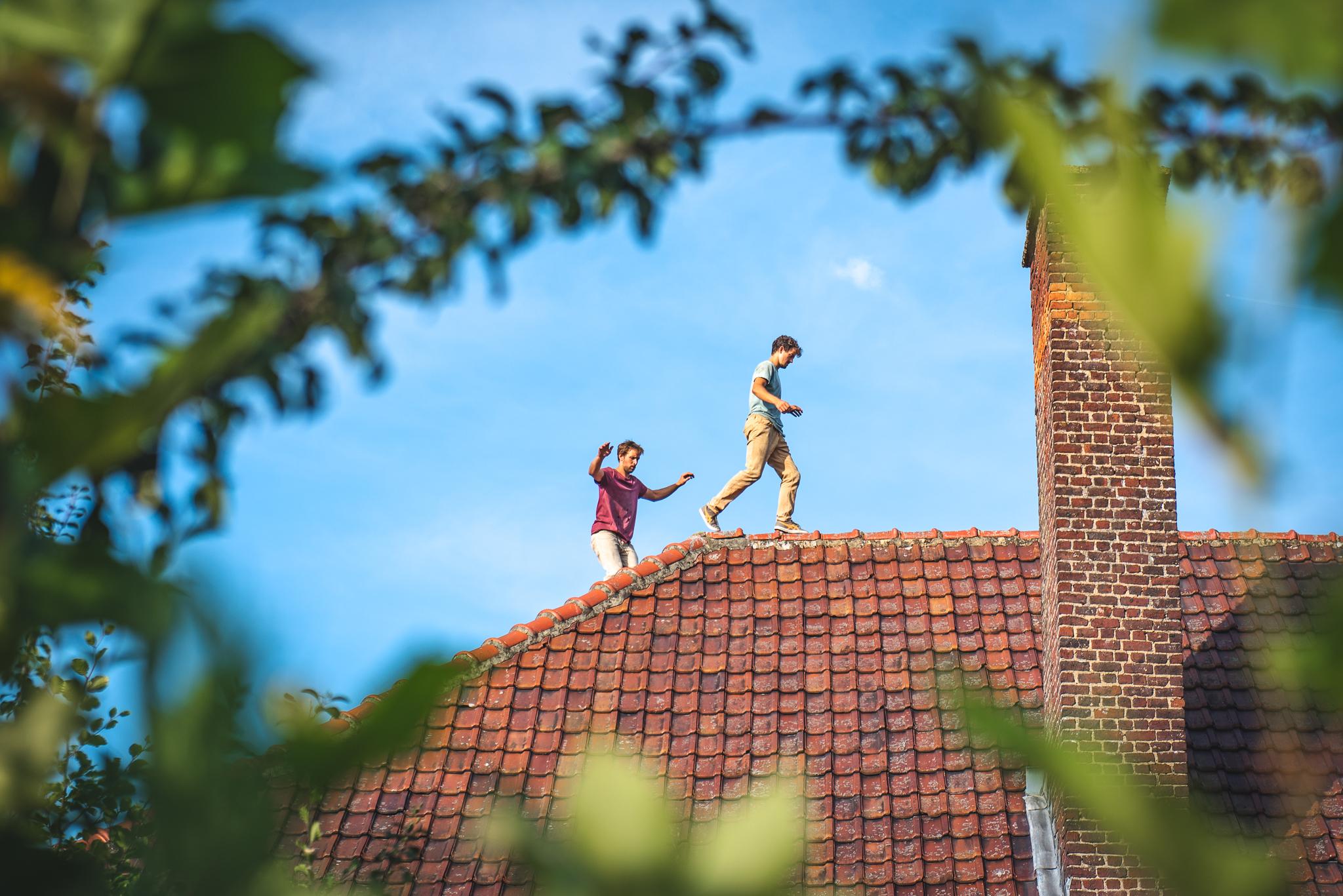 Follow me is a performance by two Belgian urban acrobats, Ward Mortier and Thomas Decaesstecker, which invites audience to participate in a walk full of parkour and street acrobatics. Artists answered to some questions about their backgrounds and how they did come up with the concept of Follow Me.

Would you first briefly tell about your artistic duo?

We are Thomas and Ward. We are from Gent, Belgium. We founded together Be Flat, which is a circus company that has existed since 2017. We both come from parkour background and have known each other for about 14 years, since we were youngsters. Our friendship has evolved together with our movement practice.

Ward: We started off with parkour but soon began to mix different types of urban sports, such as slacklining, gymnastics, breakdance, and capoeira. Then a local circus school invited us to come and teach some parkour, which we did. Later on we went to see them training and it opened up a new world for us. We started practising at the circus and went to see all the shows.

In parkour the idea is more about doing demos and showing off the skills. We felt it was a bit frustrating, since it only told what we were capable of doing. Circus as a performing arts added a whole new layer for parkour. For instance it gave us the idea to use extreme body postures.

How did all come together – where did the idea of Follow Me come from?

Ward: Our ways parted for a while because of studies. After some time we got back together and started to work with an idea of a show, Follow Me. The idea departed from parkour. We were thinking how we could give the same experience to the audience as we have while practising. Not in a way that they would do the same tricks, jump from building to another, but we wanted our audience to be able to know how it feels to jump, almost like they were jumping with us. We wanted them to be able to travel along, to move in a public space from point a to point b.

It was important for us to create something that would be accessible for everyone, also for the people who don’t have the same mobility as us. That’s when we came up with the idea of the chairs. We bought plenty of different types of chairs and played around with them. We fell in love with these very light ones that everyone could carry around. Practising with the chairs also opened us many new layers again.

The people that follow us, we call them followers. They are recognizable by the chairs. They become part of the performance because they share the public space with us. It actually becomes like a flashmob in a way. In the show, there is actually a double layer of audience. There are the ones that have bought the ticket and then there are these random people walking by and wondering what the hell is going on.

How did you originally become interested in urban acrobatics and parkour?

Thomas: For me one of the reasons to get interested in parkour was this French movie called Yamakasi. In the movie, there are a group of friends who wake up very early in the morning and climb these gigantic flats of fifteen stores. This group is actually one of the founders of parkour. As a child, I was also always climbing trees and so forth.

Ward: My interest for parkour started in the same way. I saw some cool shows on tv. I guess we both also have always had the need to move a lot. The thing I like most about parkour is that it doesn’t cost any money. You just need your body and a pair of shoes. It’s a very cheap kind of sport which only relies on your own creativity.

Where do you get your inspiration from?

Ward: We get inspired by so many different disciplines. We always try to keep our mind and our sensores open to everything. What comes to our performance, Follow Me, the thing that inspires us the most is the space we work in. We never change the space towards what we need, but we adapt to the space in its original state. We depart from the location and start to recreate the performance based on the space. Our inspiration comes from the different architecture or some funny elements.

Thomas: The name Be Flat refers to equality for everyone. In Vilnius, Lithuania, we were performing in this town square. While rehearsing in the area we met a few locals that spent time there every day. When we had our actual performance, these local people were surrounding us. The beautiful thing was that these people were actually the homeless people that others avoided and told not to talk to. Then suddenly these rejected people would become the artists that everybody applauded for. Everything went upside down at that moment. The most interesting part for us is that the random persons really become part of the performance without them even knowing or without them being prepared for it. Follow Me creates links between people that would not otherwise meet each other.

What can the attendants expect to gain from Follow Me?

Thomas: We want to give people a different perspective of the streets they walk day in and day out. We always try to make the locals see their town with new eyes. We try to find places that not even the locals know about. Of course this can be tricky when you go to a foreign country and you are a tourist yourself.

Ward: We never want to make changes to the place we are performing at or leave any marks whatsoever. But we want to leave a trace in peoples’ minds. We want the locals to make memories and to be able to create stories they can remember even 20 years later, like “Hey you remember there was this Belgian guy hanging from that building!” It becomes like a story that travels between people. We also try to use the rough and edgy corners of the City, the ones that are less known. We want our audience to be surprised that we use those places. We want to show them that these spots can also be useful or even poetic.